The “Scuole Grandi” of Venice

Recognized as the most important social institutions in the Serenissima Republic of Venice, the Scuola di Santa Maria della Misericordia, along with those of San Marco, San Rocco, San Giovanni Evangelista, Santa Maria della Carità, San Teodoro, and dei Carmini, represented the seven “Scuole Grandi” of Venice whose members were predominantly high dignitaries in Venetian society.

Founded in the Middle Ages as a secular phenomenon of devotion and solidarity, the “Scuole Grandi” played a key role in the social, political and religious fabric of the Republic of Venice. In the sixteenth century they reached such a level of wealth and influence in the community that they were integrated into the social context of the Serenissima Republic, with a leading role in state ceremonies.

Bequests, donations and membership fees favoured the development of the confraternities, but their religious goals never ceased. The revenue was used to fund charitable works: hospitals, homes for brethren, and the distribution of goods and services were only some of the charitable deeds performed by the Scuole that became a system of social guarantee for citizens.

The original Scuola had been built in the Gothic style from 1308 onwards in Campo dell’Abbazia, where it still stands today. The complex social position of the Scuole, as representatives of an active and wealthy albeit powerless class, had an impact on architecture. Right from the outset, the members of the confraternity revealed their impressive architectural ambitions for the project: a majestic building, the reputation of which would spread beyond the borders of the city, not only within Italy, but across all of Christendom. Expanded several times in the course of the centuries, in the late fifteenth century the Misericordia first proposed the reconstruction of its headquarters elsewhere, to provide a larger and more prestigious location for its ever growing number of members. At the beginning of the sixteenth century the project by Alessandro Leopardi was chosen, but the defeat at Agnadello (1507) proved to be a major setback for the Republic of Venice and the construction would not resume for another two decades.

Jacopo Sansovino and the Scuola Nuova

Arriving in Venice after the Sack of Rome, the Florentine architect and sculptor Jacopo Sansovino was entrusted with the project for the construction of the “Scuola Nuova” partly thanks to the esteem of Andrea Gritti. The Doge had identified him as the ideal person to implement his architectural renovation project for the city on the lagoon. The development of the innovative project was hindered by obstacles and reconsiderations and the building remained unfinished. Begun in 1532, the imposing quadrangular structure was strongly influenced by Roman classicism, which the great architect knew from the works of Bramante, Raphael and Sangallo. Sansovino was able to bring a great sense of harmony to the entire project: he designed the interior referring to the layout of Roman basilicas, while maintaining the traditional model of the Venetian schools. The interiors, completed only after his death, were richly decorated with works of art worthy of the importance of the Venetian Scuola Grande. Veronese, Zanchi, Lazzarini, Pellegrini and last but not least Domenico Tintoretto, son of the famous Jacopo, were only some of the artists involved in the decoration of a building that still retains the splendour and prestige with which it was conceived. There are even some drawings attributed to Palladio, which are believed to represent the Scuola Grande della Misericordia.

The Misericordia in the modern age

The complex history of the Scuola Grande della Misericordia continued in the centuries that followed. Unfinished at the time of the death of Sansovino, the building was not inaugurated until 1583 and works continued for another two hundred years. The end of the Republic of Venice forced the confraternity to leave the site. Since the beginning of the nineteenth century the Scuola has been used in different ways: firstly as military lodgings, then as warehouse, and finally as the State Archives.

In 1914 it became home to the educational and sporting activities of the Costantino Reyer Sports Club, which in spite of many logistic difficulties managed to transform it into a sports temple in Venice. The highest point of the unique relationship between the Scuola Grande and the Reyer Club was basketball, a sport that became popular in Venice first and then in the rest of Italy, and which influenced the identity of the club and shaped the spaces of the Misericordia. The first floor, with its court and famous wooden grandstands, was consecrated as one of the greatest temples to basketball, not only because it was the backdrop to epic challenges, but also because of its exceptional features. The Misericordia was home to the Reyer Sports Club until 1991 when the City of Venice entrusted the restoration of the building to Giovanni Battista Fabbri, although this work was never completed. The works will finally reach completion in 2015 thanks to a new restoration project for the Scuola Grande by architect Alberto Torsello. 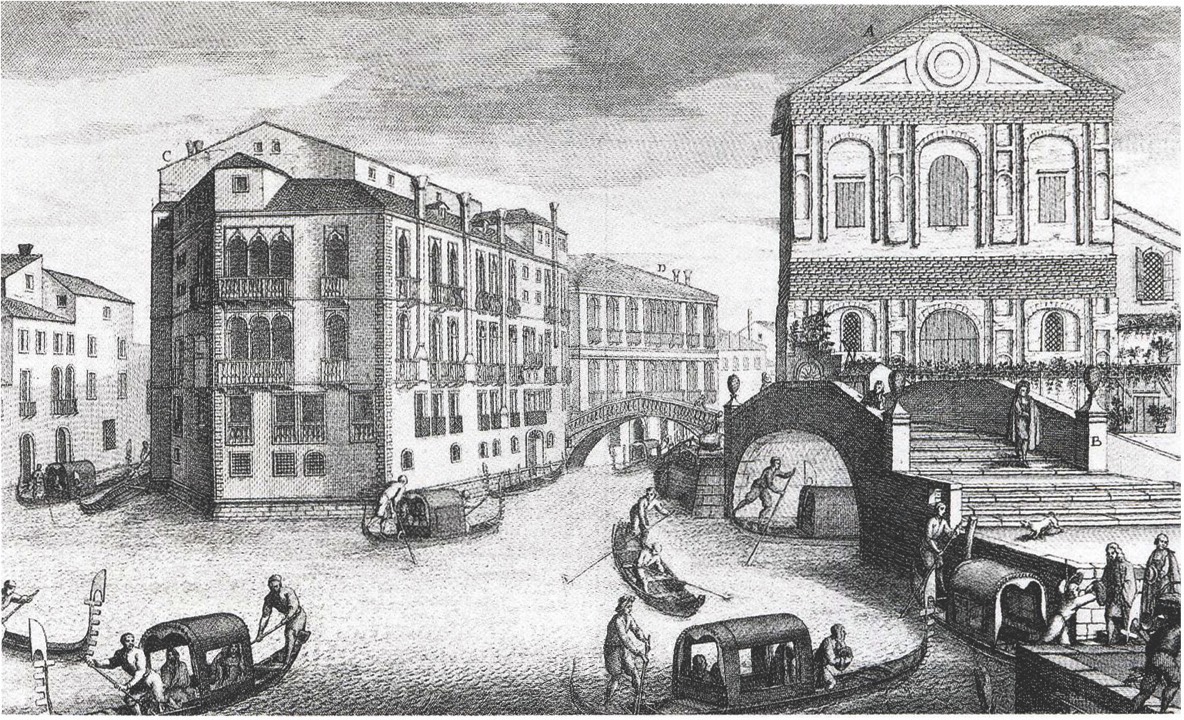 The defeat at Agnadello slows down the building works, which will only resume twenty years later with the arrival in Venice of Jacopo Sansovino.

Four new projects by Jacopo Sansovino, Pietro Vido, Guglielmo dei Grigi and Giovanni Maria Falconetto, as well as the earlier plans by Leopardi, who has since died. The Sansovino design is chosen

The Scuola della Misericordia is still without roof cover, flooring on the first floor and staircase. Due to financial difficulties it is merged with the adjacent and wealthy Scuola di San Cristoforo dei Mercanti della Madonna dell’Orto. Jacopo Sansovino dies

In his guide to Venice, Francesco Sansovino (son of Jacopo) says that the Scuola Grande della Misericordia is considered by his contemporaries as one of the most beautiful and important buildings of the city 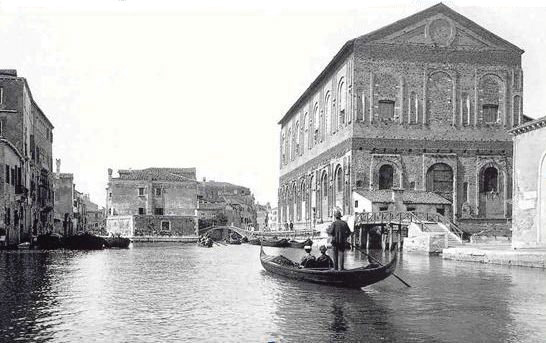 Restoration of the Albergo

The ceiling and the floor in the hall on the ground floor are restored, but also the ceiling proves to be unsafe

The end of the Serenissima Republic of Venice. A few years later Ludovico Manin, the last Doge of Venice, dies 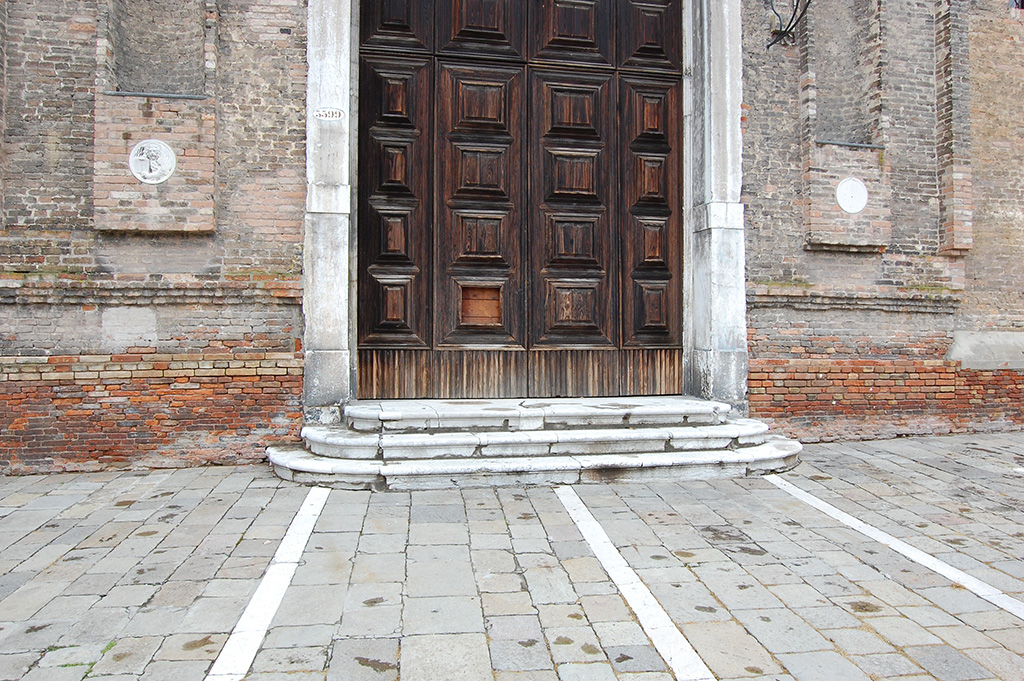 The marble floor is moved to the Marciana Library. The building becomes a warehouse for storing liquids and cannot be restored due to lack of funds

During the Risorgimento the short-lived Democratic Republic of Venice is established, presided over by Daniele Manin; the following year, the Austrians enter Venice. The Scuola continues to be put to military use

On the occasion of the “Remembrance of Jacopo Sansovino”, the Scuola Grande is cleared of interior additions and recognized as a historic building. The intervention will be short-lived, however, with the lower floor being designated to the State Archives that the same year 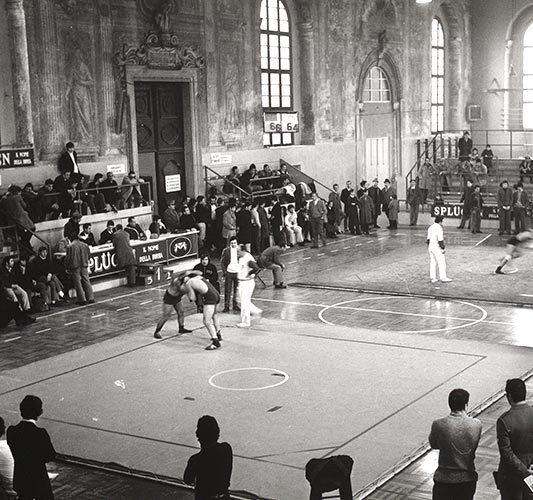 The Scuola della Misericordia is declared a site of special artistic interest under Law no.1089 of 1st June 1939

The Superintendence starts the renovation works on the ground floor, the first floor, the attic and the staircase

The City of Venice announces the Project Financing, which is entrusted to the company S.M.V. founded by Luigi Brugnaro

The company S.M.V. completes restoration works of the project by architect Alberto Torsello